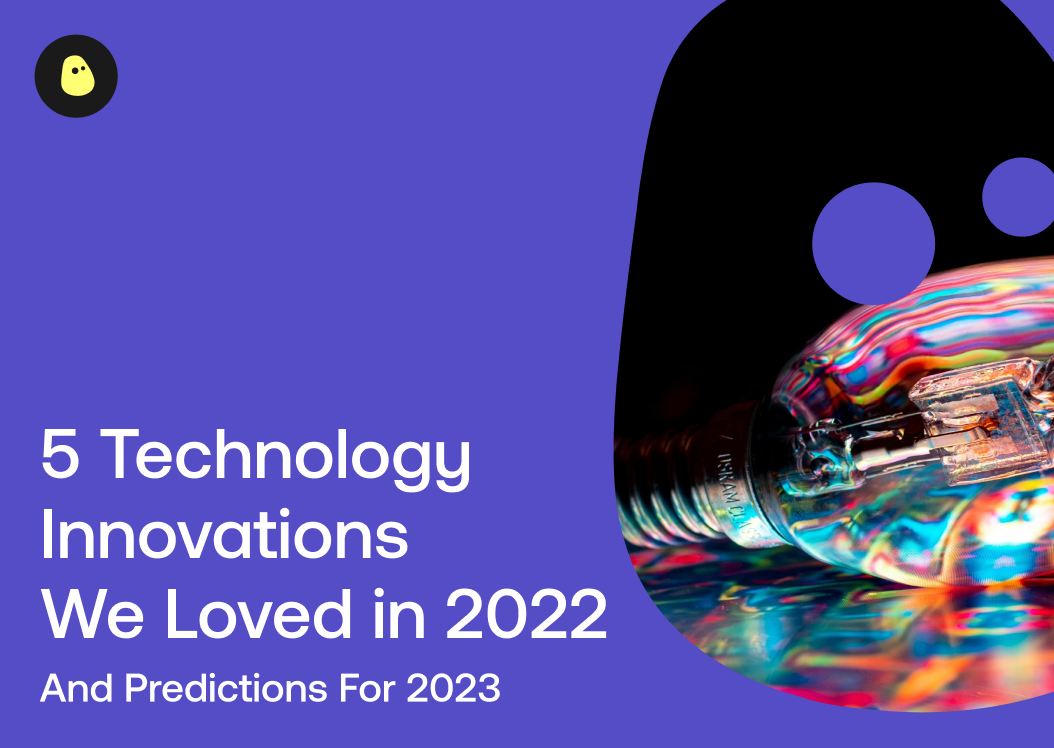 With the acceleration of the adoption of emerging technology by more businesses across the globe, predicting key trends that will impact our society and businesses moving forward is key to inspiring new innovative ideas that will shape digital products.

We've asked a few of our spuds about their favourite tech innovations of 2022, and we've listed our top five alongside their predictions for upcoming trends we should keep on watch in 2023.

AI, specifically Machine Learning in all its awe-inspiring forms, promises to stay at the forefront of digital products in the years to come, as we've witnessed in the past year.

On text-to-image and style transfer side of things, the biggest breakthrough is the shift happening in the underlying algorithm models, which has enabled things like DALL-E 2, Midjourney and Stable Diffusion to be widely available and improving at a super fast pace Taavi Kelle, Design & Innovation Lead

DALL-E 2, Midjourney and Stable Diffusion form the top trio of this year’s AI powered image generation tools. Each tool has its own strengths and weaknesses, but they are all capable of creating highly detailed images based on text descriptions - known as prompts - or by using existing images as seeds.

There's the concern around the effect our cultural and historical bias will have on AI generated art. Walk into any major gallery and there's obvious issues around diversity, stereotypes, status, gender (male gaze) and race.

If art is used for generating models for AI art, then we need to question whether it's actually just amplifying and further embedding behaviours society is actively trying to abolish. Matte Fletcher, Team Engineer

But text-to-image AI is just one area we've seen emerging to the forefront this year - AI copywriting assistants are on the rise, with tools like Jasper, Copysmith and Frase promising to lighten the workload of digital marketing teams by providing a helping hand with content creation.

In essence, LPWANs are emerging as the next-generation wireless ecosystem - they can offer the functionality of short-range communication technologies, like radio or Bluetooth, while covering long distances, which was previously exclusive to mobile communications.

LoRa has emerged as one of the strongest competitors in the low-power wide-area network race. With more research and standardisation through the LoRa Alliance with things like LoRaWAN, I reckon we'll see a lot of adoption as the barrier to entry is lowered with every iteration.

It's previously been seen as a stopgap by some until cellular tech like 4g/5g is deployed. But it's quickly being identified as its own standard, being significantly cheaper and requiring less energy to perform.

A process known as hydration solves an issue most JavaScript frameworks deal with: transforming pre-rendered HTML into interactive content. But it does so at the expense of adding significant delay to the start-up process - the Achilles heel of JavaScript frameworks. At the end of the day, who wants a slow and unresponsive website?

Currently, the dominant frameworks in the front-end world (React, Vue, Angular, etc..) are very good at building complex applications but have some significant performance issues, especially from a "time-to-interactive" point of view. This can negatively impact user drop-off rate, which can be especially detrimental in cases such as e-commerce.

The main reason is that the whole app needs to run and start up before your site is interactive. You can think of it as the time it takes for your computer to boot up when you turn it on.

There are some private solutions to this problem, but they're not available to others. Alessandro Artoni, Tech Community Lead

Resumable frameworks is not a new term, but we've seen a couple of public frameworks emerging that our spuds believe are worth keeping an eye on. The ultimate goal is to reduce the time-to-interactive time to its minimum.

Frameworks like Qwik have a completely different architecture, allowing the page to initially run and display without any JavaScript executing and dynamically download and run only the functionality it needs, making for a massively faster experience - and hopefully leading to better conversion.

Coming back to the boot-up analogy, this works like when your computer is on standby - you don't need to start the operating system or your programs again; they're already there, ready for you. Alessandro Artoni, Tech Community Lead

We can't omit to mention the third iteration of the Internet, one of the most controversial trends of 2022 and beyond: web3.

This year has been marked by repeating cycles of bear and bull phases, ending the year in the most incredible crash-and-burn ever with the fall of FTX, exposing the darker side of the industry for everyone to see.

But beneath all the noise, some really cool stuff is happening. I'm hoping we can finally move from hyper-financialisation to focusing on utility and new types of experiences now that the web3 equivalent of the dot-com bubble seems to have finally burst.

Hardware supply chains and the chip shortage have been completely messed up for around two years now, which has caused people to push existing hardware further.

Despite the chip shortage and supply side issues, I’d be remiss to not celebrate the advancements - Apple Silicon has proven to be an incredible step forward for Apple and there’s a lot of other interesting and powerful ARM-based stuff coming out in general! Taavi Kelle, Design & Innovation Lead

Apple Silicon marks a significant return to its roots for Apple, taking back the control by creating custom architecture optimised for the Mac in which small size and power efficiency are critically important.

There's also been promising signs of offloading traditionally CPU-centric tasks to GPUs and making the most of every bit of power contained in our computers - GPU Audio is a great example of this! Taavi Kelle, Design & Innovation Lead

Trends that will shape technology in 2023 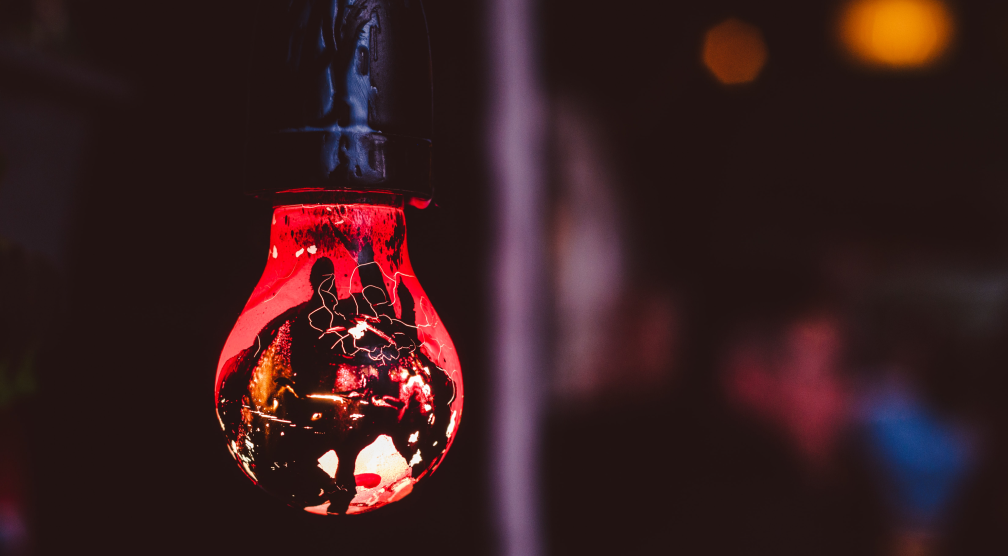 Adobe has been in this place for a long time, but its user base is still comparatively niche when compared to word processors and spreadsheet tools, which are far more ubiquitous.

Microsoft recently announced Designer, which has a DALL-E featureset built into it, signalling a beginning of their journey to bringing these features to "basic" built-in software on every computer.

Notion has recently opened beta for their AI-assisted writing assistant.

Tools and suites of tools like Runway will continue on their trajectory and likely amass a huge amount of new users as more and more people want to express their creativity in new ways.

Most crucially, I’m hopeful that we will see lots of healthy discussion, debate and codification of ethics around training datasets.

Whilst the most talked about AI assisted tools this year have occupied the realm of image generation and language modelling, there’s also been interesting progress on audio and music tools.

Many of the industry-standard tools, such as iZotope’s Ozone and RX, already offer helpers powered by machine learning algorithms and there are increasing amounts of AI driven rebalancing and stem separation tools such as LALAL.AI and RipX, which are gaining popularity amongst producers.

Jukeboxand Musika! are great examples of models that have been, and can be, trained on various materials and then used to create new “in the style of” musical pieces. An average song length audio file contains far more information than a single image, so the models and processing required to create convincing results are more complex, but I’m really excited to see this space continuing to evolve.

Speech modelling is now also getting alarmingly good, as evidenced by the podcast.ai project. Whilst this example is benign and the results are somewhat humorous, it does raise urgent and important questions around ethics and safety. Taavi Kelle, Design & Innovation Lead

I predict virtual reality is going to start to be productised for the mainstream. I think it's probably getting to the stage where there's a convergence of the price of hardware getting low enough, the computer processors being powerful enough, and the emergence of VR platforms that people can build applications upon (creating AppStore-like markets for VR apps); which together will take it out of the realm of niche applications and gaming, and more towards a world where it might become commonplace for us to "jump on a VR" instead of "jump on a Zoom/Teams/Hangout". It’s still early days but I think we’ll start to see the roots of this starting to emerge. Adam Alton, Specialist Engineer

I’d love to be proven wrong, but my gut feeling is that we're easily at least five to eight years out from having experiences, tools and products that stand outside of the novelty, entertainment or games space (nothing wrong with these - but what's next?). Taavi Kelle, Design & Innovation Lead

I expect to see more no-code platforms pop up (and increasingly powered by ML tools). Framer has fully pivoted to this space, Webflow is doing cool stuff, and lots of other interesting tools like Bubble are on the rise, with people building profitable businesses without writing a line of code. Taavi Kelle, Design & Innovation Lead